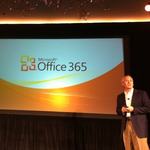 Today marked the official launch of Office 365 with a New York City event hosted by Microsoft CEO Steve Ballmer. The sultriness of the hot June day did not dampen the obvious enthusiasm Microsoft executives, engineers, and some partners all have for the global release of the product, but not everyone shares this enthusiasm. Real concerns exist for partners over profit, compatibility with Line-of-Business apps, and migrating customers.

There is one thing on which we can all agree: Office 365 solidifies that one of the most established technology companies in the world has realized that the computing world is changing and that it must make that transition or die.

Perhaps the most telling statement about this transition, particularly of business IT moving from a locally deployed systems world to one hosted in the cloud, was an anecdote from Ballmer about a small business customer. The customer was pondering placing a jacuzzi in his old server room because Office 365 would allow him to dismantle many of the servers running his on-premise infrastructure.

Ballmer admitted he wasn’t sure if that customer was joking or not, but what he said next was no joke: with Office 365, one Microsoft customer was able to take 60 servers offline.

Microsoft executives drove home not only the benefits of Office 365 but also improvements made since the beta was released in April. According to Eron Kelly, senior director of online services at Microsoft, there have been some enhancements since the beta release, including scalability improvements and some changes to the UI.

“In the small business offering, there have been improvements in the way Web apps are profiled, things have popped up a bit more. These changes are based on feedback,” he said.

Kelly also waved off criticism that Microsoft is late to the cloud space. “For me personally it’s kind of funny when I hear that,” he said. “I started working in late 2004, early 2005 on cloud services. Late 2005, 2006 we put down the business plan for BPOS and now 365.”

He also addressed speculation that Office 365 could cannibalize sales of the popular Office desktop suite. “Over time we see [this] mixed shift â€“ we’re excited about thatâ€“moving customers to the newest version more readily. We make more money, customers save more money, we don’t see this as cannibalization.”
Not everyone is so optimistic. Especially Microsoft partners. “What is the danger that clients will compare prices with their current hosting partner offers and then request Office365 services from their service provider as an agent of Microsoft, or worse still sign up directly with Microsoft?” blogger and cloud consultant Walter Adamson wrote in a blog post.

Mike Eden, president and CEO of Allarus Technology Management and a longtime Microsoft partner, also expressed his concerns. “Microsoft’s expectations that partners, particularly the SMB partners, are going to just jump and migrate all of their clients is very wishful thinking. The dollars aren’t there for the partner side,” he said.

Other vendors in the tech industy insist that Microsoft is too late to the cloud space. OfficeDrop’s Co-Founder and CEO Prasad Thammineni said, “Office 365 is too little, too late. iCloud’s APIs are better and more open. Contrast Apple’s combined phone and computer platform with Microsoft’s little-adopted Windows phone operating system and the choice to get the lion’s share of developer investment dollars is pretty clear.”

Microsoft has addressed some of its partners concerns. Tom Rizzo, senior director of Microsoft Online Services said “we’re very partner-friendly, we allow the reseller to release Office 365 licenses. Customers can come to us directly, or the partner can sign up for what we call a syndication deal. They are the front person and they become the partner on behalf of the customer. With the cloud model, partners have a more consistent touch with the customers. The great thing we have heard from partners is [the cloud shift] is not removing them, it’s placing them more in front of customers.”

Some partners are more in-line with Rizzo. “Overall, we see Office 365 as a big leap forward for Microsoft in the cloud services space,” said Tim Smith, vice president at Avanade. “They now have an offering that is marketing leading in terms of capabilities and has a variety of price points to compete in the marketplace.”

Office 365 is just off to the races and it will be interesting to see how it will be embraced and how its adoption will play out for partners.
As of today’s launch, Microsoft Office 365 is now available in 40 markets. Service plans run from $2 to $27 per user, per month. It includes Office Web Apps, Microsoft Exchange Online, Microsoft SharePoint Online, Microsoft Lync Online, and an external Web site in minutes, for $6 (U.S.) per user, per month.
Businesses can try it for free for 30 days by signing up at www.office365.com or from their local Microsoft partner.

PR: Qualcomm Collaborates With Microsoft on Next Version of Windows :: Posted on June 02, 2011