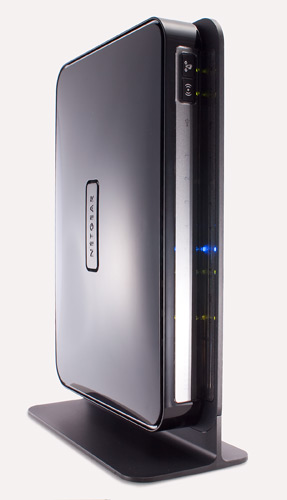 Bottom Line
Netgear’s N750 is a throughput thoroughbred in the 5 GHz band. Performance at the 2.4 GHz band is slightly above average with other top 2.4 GHz routers on the market. Advanced features and easy setup makes the N750 a router to easily recommend, despite anemic NAS capabilities.

I want to state outright: I have never seen faster throughput at the 5GHz band than with Netgear’s N750 Wireless Dual Band Gigabit Router (WNDR4000) ($130, street). The vendor claims the router can do 450Mbps at the 5GHz band. In the lab, due to high performance throughput testing and real-world RF interference, if the product tests out at even half the vendor’s touted rates, I consider that very good throughput. The N750 exceeded my expectations, getting a maximum throughput of 286Mbps at 5GHz. That’s an unprecedented number, and only Netgear’s N600 Wireless Dual Band Gigabit Router (WNDR3700) and the Cisco Linksys E4200 Maximum Performance Wireless-N Router come close to that kind of performance. While it didn’t have the same comparable killer performance at 2.4Ghz, it was within striking distance of the top performers. Add dead-simple set up to sizzling speeds, and we’ve got a new Editors’ Choice wireless router.

Like the N600(WNDR3700), Netgear’s N750 router is perfect for more advanced users and those who like to tweak their Wi-Fi networks. However, Netgear’s new Genie wizard allows for a setup process that won’t bewilder networking novicesâ€”although if you have true router-phobia, look to Cisco/Linksys’ E-series, which practically sets itself up. Because the N750 is available at retailers online from $130 to $150, the N750 is cheaper than the Cisco/Linksys E4200, which is its closest competition on the market. The N750 also has a wider feature set, and although Cisco will be offering virtual USB via a firmware update this summer, the N750 has NAS USB capabilities (although no printer sharing).

The N750 is an easy Editors’ Choice pick because of its advanced features, easy setup, and breathtaking performance in the 5GHz band. The N750′s 2.4GHz-band performance is well above average and it’s more than adequate for connecting wireless devices for web surfing, email, and other light bandwidth tasks. If you plan to do a lot of large file transfers or media streaming, the N750 may be the best router on the market for those jobs. My one criticism is that the USB drive support can be flaky. I still have yet to see a device that can handle being a router and a NAS and perform both functions excellently. The N750 is decent at handling lighter file-sharing and streaming tasks, but if you want a true NAS, buy a NAS.

Specs and Design
The N750 ships with a stand so you can position it horizontally or vertically. It has a USB 2.0 port, four Gigabit Ethernet LAN ports, and a WAN port. There’s also a button to power the router off. You’d be surprised how many routers do not have a power button. If you want to do a hard reset, you have to fiddle with wires or go into the router’s management interfaceâ€”and either is a hassle.

The design does not differ much from Netgear’s N600 (WNDR3700). The front LEDs include one that indicates the status of a connected UBS device and when the device is safe to remove. There’s also a WLAN on and off switch, which powers up the wireless radios, and a WPS button to automatically connect WPS-supported wireless clients. Although Netgear doesn’t typically disclose hardware specs, I can confirm that the router uses Broadcom chipset. The 5GHz radio is equipped with three stream antennas, and the 2.4GHz radio uses 2×2 antennas. This accounts for the unbelievable performance at the 5GHz band and the better than average performance at 2.4GHz â€”which is fine. You want the 5GHz band to scream when handling intense bandwidth tasks. The problem is you need to have wireless clients that also support the three stream technology to take advantage of that speed. The laptop I use for testing, HP’s Elitebook 8440w, does have a compatible Intel Centrino-based wireless adapter.

Setup
The router ships with a Resource CD that contains the setup files and a well-detailed user manual PDF. The manual indicates that the router can be setup using the Smart Wizard on the CD or manuallyâ€”an option for advanced and Linux users. This router is compatible with PCs, Macs, and Linux machines.

You can only use the Smart Wizard setup for Macs and PCs, and that’s the option I chose. Clicking Setup launches the Netgear Genie app. Setting up the N750 is not wireless setup, as it is with the Cisco/Linksys E-series routers. You have to have a physical Ethernet cable. I had the router connected to my broadband via the router’s WAN port, and I had my laptop with the setup software installed on it connected to the router with an Ethernet cable to one of the router’s LAN ports.

Setup is relatively simple: name your SSIDs for both the 2.4 and 5GHz bands, setup security (which defaults to WPA2). Enter a passphrase, and you’re done. While I’ve previously criticized Netgear for absurdly detailed, almost condescending setup instructions like “take the adapter labeled from the box and plug it in,” that’s not the case here. In fact, the instructions don’t emphasize strongly enough that users have to connect it via an Ethernet cable to their computer as part of the set up their system. But that’s one minor complaint in an otherwise excellent setup system.

Features
Typical home users will probably just be happy with the Genie setup process and leave the router as is. For them, Netgear offers a Live Parental Control Service through OpenDNS. It’s an easy way to keep the kiddes from viewing anything that could scar them from life on the Internet–I detailed how efficiently it works in my review of the N600 (WNDR3700).

The level of control the N750′s features offer will delight advanced users. The entrÃ©e to those features is the management interface, which will look familiar to anyone who has managed a Netgear router in the past, but since the release of the N600 (WNDR3700), Netgear has padded features even more. Advanced features include guest networking, content filtering, the ability to set router up in Bridge or Repeater mode, as well as extensive USB functions. For example, you can set up an approved list of USB devices to connect to the router.

I connected a 75GB Cirago USB drive to the router. The drive was correctly identified as a Cirago device within Netgear’s interface, and the free and used storage was reported correctly, as well. The router also can act as a media server. I connected a USB drive stored with several videos and was easily able to stream to wireless devices on my network. You can access an attached USB drive through Windows Explorer via a UNC path to a shared folder on the USB device. Users can also create sub-folders from within the router interface and edit permissions. Managing a USB device’s folders and files through the router takes a little know-how of folder and file management. Again, for more robust but easier file sharing and streaming, a NAS like Iomega’s Home Media Network Hard Drive, Cloud Edition, LG’s Super Multi N2A2 NAS or QNAP TS-212 TurboNAS are better options.

The N750 also supports IPv6â€”something you want to find in any future networking device purchases. It’s easy to enable IPv6 with just a click.

Performance
I want to highlight how great the performance of the N750 is at the 5GHz. Performance was very good at 2GHz, of course, but what really impressed me was the consistency of 5GHz throughput, which didn’t vary much when I was 5 feet or 30 feet from the router. I test using Ixia’s IxChariot Throughput and High Performance Throughput scripts. They are bidirectional tests, simulating upload and download traffic, with one endpoint wired to the router and another wirelessly connected. Here are the results:

Comparison at 2.4GHz to throughput of single-band 2.4GHz routers:

Comparison at 5GHz to throughput of dual-band routers:

When I switched to a High Throughput testing script, I get even better results. I don’t normally report the results of high throughput testing I do on dual-band routers because I find very negligible difference from the “regular” throughput script results–no more than 5 Mbps more or less than with using the regular script. The High Throughput script simulates intense, rigorous traffic like VoIP or high-def video. The N750 is the first router that gave significantly different results using the High Throughput versus the regular throughput test (at which the N750 also did well). The N750 delivered a shocking 286 Mbps using the High Performance script at a distance of five feet. The router clocked 279 Mbps at 15 feet and 250Mbps at 30 feet on the same test. These results show that the N750 is built to handle high-throughput network traffic.

USB performance was less speedy. The performance is actually contingent on the performance of the USB device you attach to the router. Uploading a 1.5GB file to my Cirago device via the router took a bloated 4MBps. You get far better write speeds with dedicated NAS devices. However I still was able to stream a video without much latency.

Netgear and Cisco seem to be neck-in-neck with producing some of the top-performing wireless routers on the market for home consumers. But Netgear’s N750 Wireless Dual Band Gigabit Router has stupendous performance and a great set of features, making it the best router we’ve seen yet. If you are in the market for a router and need the capabilities of the 5GHz bandwidth, the N750 Wireless Dual Band Gigabit Router is your clear first choice, and our new Editors’ Choice wireless router.